I just signed off on my Titan from the dealer, after they fixed some small problems with the paint that I pointed out when I bought it. That was 2 1/2 months and 4500 miles ago. I'm not talking about anything big, just some little bumps in the paint on the front of the hood and a couple of small scratches on the back of one of the doors. I started to suspect that the service dept. wasn't too swift when after the initial "detail" job that they kept my wife and I waiting for 3 hours when we closed the deal, left bird droppings in the bed of the truck. We made an appointment to take it back in two weeks to clean the truck properly and fix the small paint problems. My wife was back an hour and a half later, with the truck untouched. It seems that the dealership had been sold, reorganized or something and they didn't have any clay bars, buffers, soap, water or motivation. Give them 2 or 3 weeks to acquire all of the above and reschedule. Rescheduled to drop off Thursday, and pick it up on Saturday. During the week, I was debadging the doors and didn't have time to finish one side. (It takes a long time to get that sticky tape off!!) I told the service guy that I didn't expect them to do anything about the tape, I wanted to be reasonable you know. Being nice guys they stripped off the tape, and the paint on the rub strip underneath. They also managed to get off some of the little bumps. Scratches on the door are untouched. The dealer wanted to keep the truck longer. As much as I would like to be able to buy vehicles for the dealer to keep for me, I'm just not in that income bracket. Took it back the next week and picked up the rental car. That was a Monday. The truck should be ready to pick up by the end of the week. Spoke with the service writer on Thursday. He said the truck was almost ready and would be finished on Friday. Spoke with him again Friday an was assured everything was complete. The weekend before dropping off the truck, we took a trip up the central valley. A lot of bugs live and die along the highway. My wife went out to pick up the truck. At this point, we are dealing with the general manager of sales, to get things sorted out. From 20' away my wife and the manager can see the front is covered with bugs. Untouched. Door, untouched. At least they fixed the paint that they messed up.

By now, even the manager realizes that the service department is a worthless bunch of slack-jawed yokels. Somehow they managed to figure out what the truck was in there for, and took care of the original issues. I don't know if the sales manager motivated service, or if just the 5th time's a charm, but I accepted the truck. It was evening, I hope that daylight doesn't reveal anything.

I think that the sales manager was actually trying to take care of our issues with the truck and I would be willing to buy another vehicle from them. The service department was something else. While I will give them an E for effort, at least for the workers who got the truck shining like it should have when it left the lot, the writers and management obviously can't care for anything except getting stuff out the door. If there was enough communication for somebody to put a piece of masking tape marking the location of the defects, this would have been resolved weeks ago. Even now, the service manager didn't leave the touch-up paint he promised "for my trouble" 2 hours earlier.
H

Sounds like a good time to find a new service department before this one does some real damager to your Titan!
D

connell Nissan in Oakland.
B

Thanks for perusing my rantings. The issues were so minor, but dragged on so long that it was really pissing me off. I'll try Connell, the next time I need service. Thanks
D

Well, Here in Colonial Hieghts Virginia.........(hard to spell) I have had good service with Dominian Nissan. I wish you had a better experience with your dealer. I had a horrible experience with my Dodge dealer when I bought My ram in 01 but it eventually got resolved. (I was in N.C. then). I love my Titan more than anything in the world right now(excluding the girl).

I hope you have a great time with it. I know I have.
P

used to own it

my uncle owned it when it was magnussens. he got tired of the businness and sold his low profit dealerships
H

Re: used to own it

[quote name='peninsulatitan1']my uncle owned it when it was magnussens. he got tired of the businness and sold his low profit dealerships[/quote]Welcome to the Spot!
B

Welcome Peninsulatitan, I hope you enjoy the Spot. I'm guessing that you are here on the peninsula, I'm in San Mateo.

Maybe things were better at the dealership when your uncle owned it. It still said Magnussens when we bought the truck, but it was Superior when we went back. We had bad experiences with our Durango at 2 different dealerships over electrical problems and the brakes. We copied the GM on an email to the Dodge regional manager and the Bureau of Automotive Repair and then things got fixed pretty quickly. You just shouldn't have to go there to get these people to take responsibility for fixing these things. It's not like they don't get paid for the work. They just don't get over, like they do when they're screwing a customer.

Over the weekend, the sun hit the windshield just right and you can see overspray on the windshield. I tried to wash it off, but it's hard. It's probably clearcoat that drifted over, because the windshield wasn't masked off. I will not be taking it back to them to have it removed, I'm afraid I might end up with a two tone paint job or something. At least they didn't' dent it <img src='http://www.titanspot.com/Titan/public/style_emoticons/<#EMO_DIR#>/013.gif' class='bbc_emoticon' alt=':smt017' /> 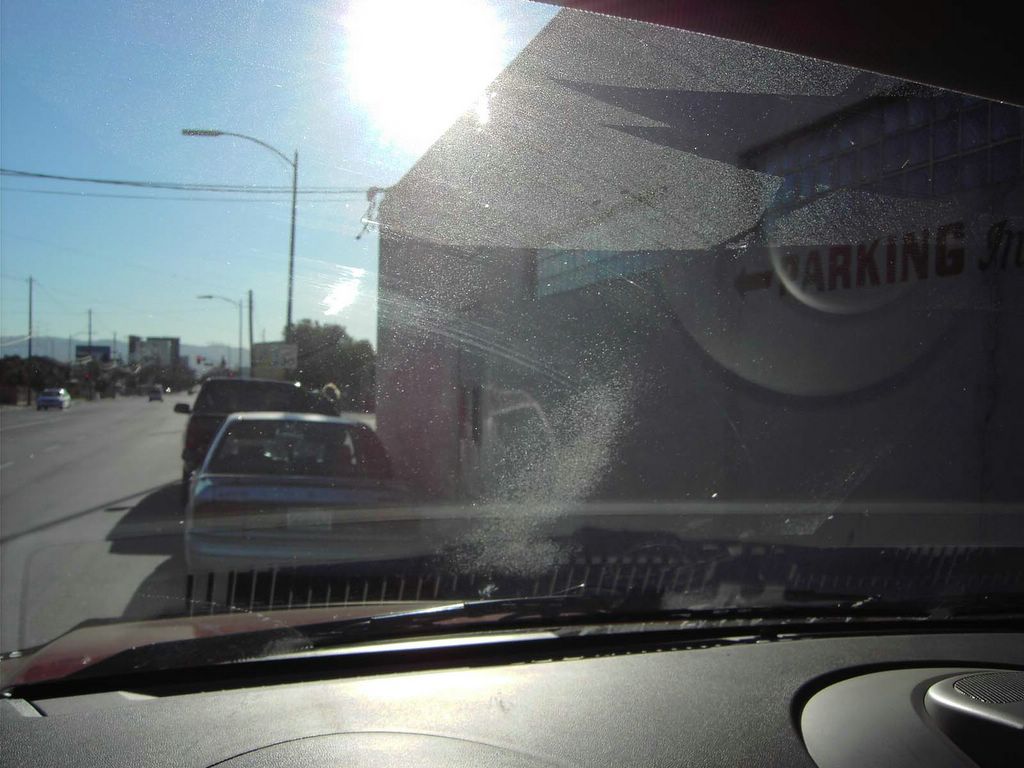 sorry man but people that work in the service department arent that bright. i just wanna say that you shouldnt have to go to that place over and over again. try san leandro nissan, theyre pretty good and the management is great.
You must log in or register to reply here.
Share:
Reddit Pinterest Tumblr WhatsApp Email Link
Top